Someone told me #any? didn't stop iterating after finding the first truthy value, that I should use #detect instead, but turns out both methods behave the same, at least in Ruby 3.0.1.

Try running this for example:

So after googling I found that we can do this:

Always use retry inside rescue blocks

Ruby includes a retry keyword that would bring execution back to the start of the current method while preserving scope. But what if you do this?

That would fail with an Invalid retry, which is one of the few illegal statements in Ruby.

retry is only allowed inside rescue blocks.

Defining classes using full name vs wrapping them inside modules

In Ruby, we can write classes inside modules. We usually do this to have classes namespaced to the module, so we don't risk two different classes having the same name. This is important since Ruby won't complain about re-defining a class, it would just open it and add new methods to it.

We could write classes using their full name, like this:

or, we could wrap the whole thing using modules, like this:

Both methods work the same, except the one above can only reference Attack using its whole name. On the other hand, it looks somewhat easier to read than nesting modules inside other modules. Which style do you prefer?

The spaceship operator compares two objects (from left to right), returning either -1, 0, or 1.

As you know, in ruby (as in any language) we can get a result in different ways, we could use just the sort method, of course, but I just wanted to put this in another way:

Use 'super' and add custom arguments to a specific class

This way the new variable token will be available only for the ChildOne class.

When we work with namespace it's very common to override some objects, etc that we already have. This could cause us headaches when we try to access a specific object and that object has the same name as our namespace. To have a clearer idea, let's review the next example, imagine that we have the next nested modules:

If you do Appointment.find(id) you will get an error similar to this: NoMethodError: undefined method 'find' for FHIR::Services::Appointment:Module.

The constant resolution operator will help us to resolve this. If you put:

This will work because is referencing the global namespace which is the Appointment model this way you can access directly to the model instead of the current namespace.

If you try to do this:

You're gonna receive an error because modules do not respond to the new method.

How can we use it?

You can use this useful method module_function:

A second option to do it

Another option to do so is using extend self instead:

TypeProf is a Ruby interpreter that abstractly executes Ruby programs at the type level. It executes a given program and observes what types are passed to and returned from methods and what types are assigned to instance variables. All values are, in principle, abstracted to the class to which the object belongs, not the object itself.

Now instead of doing this:

Now you can easily do the same with dig:

You can take a peek at a locally installed gem's code very easily in ruby mine.
If you are using another IDE it would require a few extra steps:
First, set BUNDLER_EDITOR in ~/.bashrc or ~/.zshrc (or whatever shell you are using)
export BUNDLER_EDITOR="code"
(code to use VS code)
Then, simply run $ bundle open gemname and voilá! Look at whatever gem you want

Since Ruby 2.7, it is possible to use numbered parameters in blocks additionally to named parameters.

This is an example of a block with named parameters:

And this is the same line with numbered parameters:

This works with multiple parameters too:

Creating an infinite loop in Ruby

If you need to iterate over a collection that its size is unknown, you can create an infinite loops in ruby easily, but if you need an index, then there's this option:

If you want to generate random but predictable sequences of numbers, then the rand command and the srand are not enough, you have to use a trick to save the state of the variable. Fibers are primitives for implementing light weight cooperative concurrency in Ruby. Basically they are a means of creating code blocks that can be paused and resumed, much like threads. The main difference is that they are never preempted and that the scheduling must be done by the programmer and not the VM.

I was interested in random sequence because I was in need to test the Montecarlo Method for getting Pi digits.

One method to estimate the value of π (3.141592…) is by using a Monte Carlo method. This method consists of drawing on a canvas a square with an inner circle. We then generate a large number of random points within the square and count how many fall in the enclosed circle. 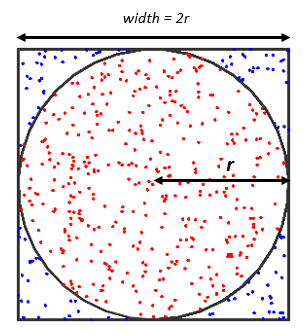 So, if you need a random sequence, you can use Sobol for quasi-random numbers.

The slice_when method in Ruby

Creates an enumerator for each chunked elements. The beginnings of chunks are defined by the block.

The block is called the length of the receiver enumerator minus one.

The result enumerator yields the chunked elements as an array. So each method can be called as follows:

The each_cons method in Ruby

Iterates the given block for each array of consecutive <n> elements. If no block is given, returns an enumerator.

Print any two adjacent words in a given text:

a is a regular parameter. *b will take all the parameters passed after the first one and put them in an array. **c will take any parameter given in the format key: value at the end of the method call.

More than one parameter

Ruby comes with the cool module Benchmark, but the only downside is that it only provides the time taken for each task.

A simple approach to get how many memory the ruby process is consuming is to call: ps -o rss:

If you need to use Ruby to connect to Aws Iot Core, this is all you need: